The remains of what may be a famous racehorse have been excavated by Oxford Archaeology East at the historic King Charles II Palace House Stables in Newmarket, the new home of our National Heritage Centre for Horseracing and Sporting Art.

Recent excavations at the site have uncovered remains which may belong to the horse, Doctor Syntax. He was born in Yorkshire 1811 and won more than 36 races from 1814 to 1823. He was a slight and intelligent horse, and is believed to have been 28 when he died.

The new centre will be housed at Palace House Stables, believed to be the oldest racing stable in the world and once home to King Charles II’s ‘running horses’ and Palace House Mansion, which stands on the site of the royal palace. The project is expected to provide a major boost for town retailers and tourism across Suffolk.

The Heritage Centre which is estimated to attract approximately 50,000 visitors a year is expected to be completed by the end of 2015; opening to the public in spring 2016. 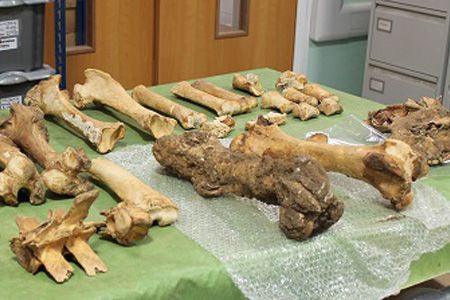