Construction began today on our new National Heritage Centre for Horseracing and Sporting Art. The scheme will see the National Horseracing Museum (NHRM) move from its current location on Newmarket High Street, to the historic Palace House site where it will be joined by a new gallery for the British Sporting Art Trust and a centre for the Retraining of Racehorses charity.

Mr Jensen, chairman of the Home of Horseracing Trust said: “A huge amount of work has already taken place to get us to this point and after eight years of fundraising it is wonderful that we are now on our way.”

“This is the first part of the story – the actual building work will take a year and then following the installation of specialist exhibitions and displays the museum will be moving over 8,000 objects from its present home to the new site.”

The new centre will be housed at Palace House Stables, believed to be the oldest racing stable in the world and once home to King Charles II’s ‘running horses’ and in Palace House Mansion, which stands on the site of the royal palace. The project is expected to provide a major boost for town retailers and tourism across Suffolk.

Graham Construction have been appointed to construct the project which is estimated to attract approximately 50,000 visitors a year. It is expected to be completed by the end of 2015; opening to the public in spring 2016.

The Museum will be owned by Forest Heath District Council and run by the National Horse Racing Museum. Further information can be found on our project page. 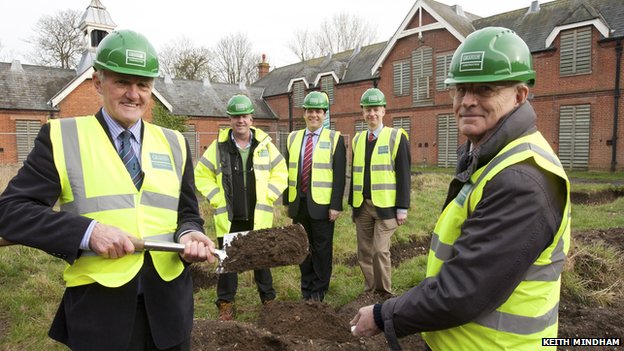